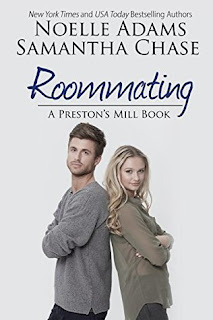 
Forget all those other roommate romances you might have read.

Heather and Chris don't hate each other...very much. And they don't have sex all the time...at least not at first. Chris doesn't go around shirtless, flexing his muscles and driving Heather wild...too often. And he doesn't get jealous and possessive every time she goes out with another man...well, maybe occasionally.

But they definitely don't fall in love...right away.

When Heather comes back to her hometown, she plans to take over her father's historic restoration business and move into a beautiful converted apartment in Preston's Mill. Then she finds out she'll have to partner up with the one man she can never forgive. Chris Dole, who abandoned her father and betrayed her trust three years ago.

It gets even worse. They don't just have to work together. They have to become roommates for six months to prove they can get along. That means Heather will have to play nice with Chris and put up with his obnoxiousness, his drop-dead sexiness, and his ugly recliner named Flo.

She'll do what she has to do out of loyalty to her father, but she isn't going to like it.

At least not much.

Roommating was a fun, light summer read. I enjoy both of these authors separately and together they wrote a fun story.

When Heather's dad is ready to retire from his business business she is all set to take over. Only he has some conditions first. She has to prove that she can work with the other partner he selected - Chris. The same Chris who left town years ago and never looked back. The same Chris that Heather will never trust since he hurt her father (even though her father is okay with everything that happened). Not only does she have to work with him for six months, she also has to live with him for that time frame to show her father they won't ruin his company when they take over. Even though Heather doesn't want to, she is willing to do whatever she has to to help her father out. I mean how hard could it be? It is only six months.

Chris used to be close with Heather and her father, but after some things happened a few years ago he ran. He had to get out and he couldn't figure out how to work through things if he stayed. So he left and Heather still hasn't forgiven him for that. He is used to running, that is is go to, but maybe he can change. He wants to be there for Heather's father now that he has grown up some and worked through some things, though everyone still expects him to run all the time.

Heather has her own flaws. She has serious abandonment issues and was a bit much at times. Like maybe she should talk to someone and try and work through some of her issues because she is old enough to try and move on. So how will this work? How can the girl who fears people leaving her work with the guy who always leaves?

Overall these two were cute together. They slowly got to know one another again and found that they liked each other. As long as they can get over their issues everything will work out wonderfully in the end. Really a cute, light, fun read.