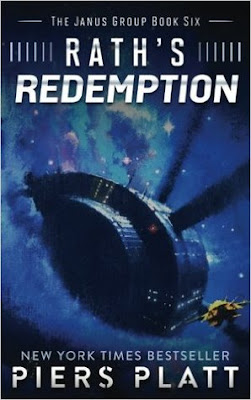 Rath's short-lived rebellion has gone horribly wrong. The Senate lies shattered, devastated by a surprise attack. The Federacy sits at the mercy of General Yo-Tsai, a brutal dictator who now controls a super-weapon. Above the planet Tarkis, Rath drifts helplessly in orbit, watching as the Jokuan invasion fleet descends on his homeworld. His girlfriend has been captured, he's running out of air, and he's just a single man against an entire army. But he's also the galaxy's most dangerous assassin ... and he's very, very pissed.

Okay. First off have you all read the prior 5 books in this Janus Group series? If not, go. Read them. I will wait. Seriously. Read them if only so then you can read this book because this book? Oh my goodness was this book so amazingly fun and exciting and better than I ever could have imagined. You should have seen me reading this on the train, my husband sitting next to me, squealing like a little girl. Just beyond ecstatic reading this book. I feel like my reviews for the prior books are all eeek! These books are so much fun! But really? I loved them, but they have nothing on this one. Rath's Redemption? It blew me away. Amazing. Fantastic. One of the most fun books I have ever read. So yes, go, read the prior books then come back and see what this one is all about.

One of the things I have loved about this Janus Group series is the cast of characters. Rath just kinds of bumbles his way through things and he feels like a normal, everyday person. Like I could do this if I were in his situation and was all tricked out with technology. He feels terrible about the things he has had to do. Especially in this second trilogy. He knows he has done terrible things, he killed people, and his conscience weighs on him. And up until now he has taken his punishment (though he didn't want to die so he got out of that part, but was totally willing to spend a lot of time in jail for his crimes). At the end of the last book the bad guys tricked everyone, caused a ton of chaos, kidnapped Rath's girlfriend Jaymy, and shot him into space to die. And he just accepted this. Like so this is how I am going to die. This is it. No fight left in him.

Then we get to the opening of this final book in the new triology. Then Rath is just like wait a minute. What am I doing? I am going to die? Um...no. F this. They think they can do this? They think they can take my girlfriend? I don't think so. I will take all of them out! I will show them who they messed with! Oh, I thought normal Rath was fun, but Rath on a mission to take the bad guys down? Oh he was amazing. I love love loved reading badass Rath. He is a force to be reckoned with. There was one scene where someone decides to try and fight him in hand to hand combat, always wanted to take on someone like him and see how they faired, and I can tell you they didn't fair very well. It was incredible. Just scene after scene after scene of me smiling like a loon and enjoying the heck out of this story.

There are lots of other great characters as well. Paisen, Beauceron, Dasi, all of them are wonderful to read. The trilogies start off with everyone doing their own thing that doesn't really seem to have anything to do with anyone else and yet somehow they all get drawn into the same final battle. Paisen was there with her rag tag team of former assassins, Beauceron and his partner, and all the rest. Plus my favorite new-ish addition - Dasi and Six. All of these characters are amazing. I really just love this series and this ending was a whopper. They all get in some tight jams, you are not sure at times if everyone will make it out of this one. And maybe they don't. With the senate gone, only the corrupt church guy left, things get really sketchy. But they have to fight. They can't let the bad guys win. They can't let the bad guys take over whatever planets they want. It just doesn't work that way. And this is where Dasi really shines. Her and her super computer. I had so much fun reading them. Reading them all really. This is a fantastic series. This last chapter is by far my favorite. I haven't had so much fun reading a story in a very long time, though the closest would be the prior books. Go, read this book. You will not be disappointed.