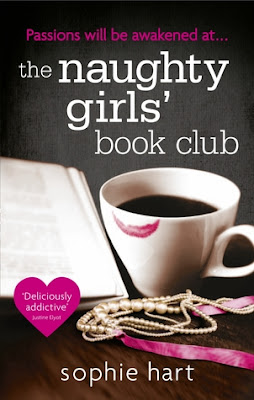 When Estelle sets up a book group in order to increase custom to her struggling cafe, what follows is more mind-blowing than she could have ever imagined...

As the first book club meeting flounders, Estelle suggests a spot of erotica to spice things up.

Inspired by their naughty novels, this group of shy suburban readers shake off their inhibitions and soon discover that their own lives can be just as scandalous...

The Naughty Girls Book Club was an okay read. Light, quick read but didn't really have much to it. So what is it about? Well, Estelle makes a book club to try and get more business to her cafe (she says after the first or second night how it is a boost, how it really is helping, but you are telling me 5 people having a piece of cake and a drink once every other week would make that much of a difference? How expensive are your prices?). So who is in the book club?

First we have Sue. The retiree who apparently has no friends. She wants to go out and do things, but her husband has worked hard his whole life and just wants to relax now. She wants to take day trips and such, but he doesn't. So she stays home and resents him without really talking to him about it. Sure she says how about we go do this today? But he doesn't know how much it really bothers her. Or she could just go by herself or try and make some friends to do things with now that she is retired.

Then there is Rebecca who is married but bored with her life. She and her husband do the same things all the time and she wants to spice things up, but like Sue, won't talk to her husband about it. She is embarrassed to talk about it with her husband or friends so nothing changes.

And Gracie. She annoyed me and was my least favorite of the group. She is super feminist, but rails on the women in the books who are submissive. Because apparently you have to be dominant if you are a woman. You can't like being in a submissive role sexually...which was annoying. But the thing I really disliked about her, about her storyline, was that she finds a boyfriend and then she is not so militant feminist. It was like she just needed a guy to see that inequality is okay. Boo.

Reggie is the only guy in the group. He came for research purposes for his studies but ended up part of the group. He was alright, but really...like I know he is shy, but he was a doormat a lot of the time. I don't know. He was okay.

And finally Estelle, the every woman. Or that is how she came across to me - the Carrie of the group. She is a divorced single mom and runs the cafe. She was fine, nothing exciting and I don't have much to say about her. She has made the last few years all about her son and job and now is starting to see that maybe she can have more in her life as well.

There was not a lot of character development in the story. I know I just wrote about these characters and that is about as much as you get to know them. It was all just surface stuff so I didn't really connect with anyone. Really the whole story was just surface level. It is the story of basically 50 Shades of Grey and how that started people talking and possibly doing things they never thought of before. Now the first book club meeting was a joke and apparently lasted 5 minutes since not everyone loved the book Estelle picked out, but then they see she is reading the 50 Shades-esque book and they decide to read that. And then it turns into an erotica book club with them reading different selections and comparing them. It was alright, but I don't know. I wanted more. I wanted more than just high-level quick conversations. I wanted to actually see these characters become friends and how this changed their life. I know you kind of did a little bit, but it wasn't developed enough to really get the feel for it.

Also, this is the story of a bunch of people who are kind of scandalized by sex. Like they don't talk about it, it is hush hush, and reading these things is a bit of a thrill. I get it, there are plenty of people like that, but I am not one of them. So I don't really understand what the big deal is about reading a book with some fetish in it. I mean I read plenty that would have super scandalized this group I am sure. So it was just a light, quick read for me. I am not one whose world was opened up by reading 50 Shades. If anything I was disappointed in the lack of non-vanilla sex in that book and I didn't understand people like these characters when that was big. So not really the book for me, but it was an okay read.