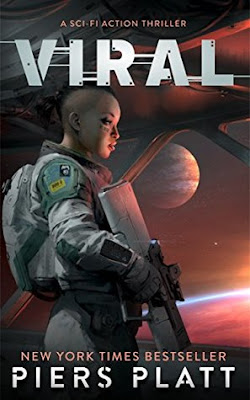 "In my first battle, I made fourteen thousand dollars in five minutes."


On a remote planet, an autonomous scout makes first contact with extraterrestrial life. Without warning, the alien attacks, ripping the drone to shreds. Humanity is at war.

Back on Earth, Sam is just another jobless graduate, drifting aimlessly while she lives off of the government's monthly stipend. When war breaks out with the aliens, she sees a way out of her life of boredom: she signs up to be a "deathstreamer," a new breed of mercenary chasing fame and fortune by streaming combat footage from the front lines. If she can go viral, wealth and celebrity are within Sam's grasp. But she'll need to survive long enough to enjoy it.

I loved Viral. I wasn't expecting to enjoy this story as much as I did. I thought it would be fun and entertaining, but I didn't realize I would absolutely love every minute of it. To me it was like some of my favorite sci fi. A future war story and what it could be like that still shows what it is like to be a soldier now. What it is like to be in this situation even though there are obviously better weapons and different things going on. This story was amazing.

If you are familiar with this author already then Viral is a bit different from his previous works in the way it is set up. In this story we follow Sam on her way to try and find where she fits in. She lives in a world where there is universal basic income and machines have taken over most of the jobs so she doesn't know what to do with her life. She went to college, but her degree is pretty useless, and she doesn't feel like she fits in anywhere. She doesn't do anything all day and it just existing. Then one day she watches some deathstreamers, soldiers that stream their battles with the alien bugs and make good money from that if they can go viral. Then she find somewhere she may be able to fit in. Something that might be worth her time and effort.

I really enjoyed watching Sam on her journey through this story. She starts off as a total newbie. She doesn't know how to shoot guns or fight or anything, and yet she signs up for this incredibly dangerous job fighting these really deadly alien bugs to try and save the human race. The battles were a bit intense and I can't imagine doing what she does. Just as I can't imagine being a soldier now. This story definitely resonated with me more than I thought it would. The discussions around the alien bugs and how they are not intelligent and we need to wipe them out in case they come to earth were interesting. It wasn't a main focus of the story, but I enjoyed watching the characters deal with what was going on and why they were even there. Sure they can make a lot of money if they can get enough viewers (and stay alive long enough), but is that really why they all joined? Is that the only reason why they are fighting? It is an interesting situation and it did make me wonder how well this would actually work if they tried implementing something like this now. It seems like it could work which is kind of crazy to think about.

Besides Sam we get to know some really awesome secondary characters and my absolute favorite was that the author included a character that was genderfluid. I may have yelled "No way! That is awesome!!" when I got to that part and definitely was telling my husband all about that person as I haven't seen a  character like them in a book before. And I loved it. I loved how the author treated the whole situation and everything that happened in this story. It was super fun, intense at times, made me really think about war and the ramifications of it on soldiers, and where the future could go. This story was not exactly what I was expecting going into it, it was so much better. I thought it would be more focused on the deathstreaming and trying to get the audience to watch you almost die in battle,  but it was more about Sam and her figuring her life out. Deathstreaming was a part of it, but not the main focus. I really enjoy everything this author has written, but this is definitely my new favorite. It was a story I didn't want to put down once I started and I am still thinking about after finishing it. I loved every minute of it.